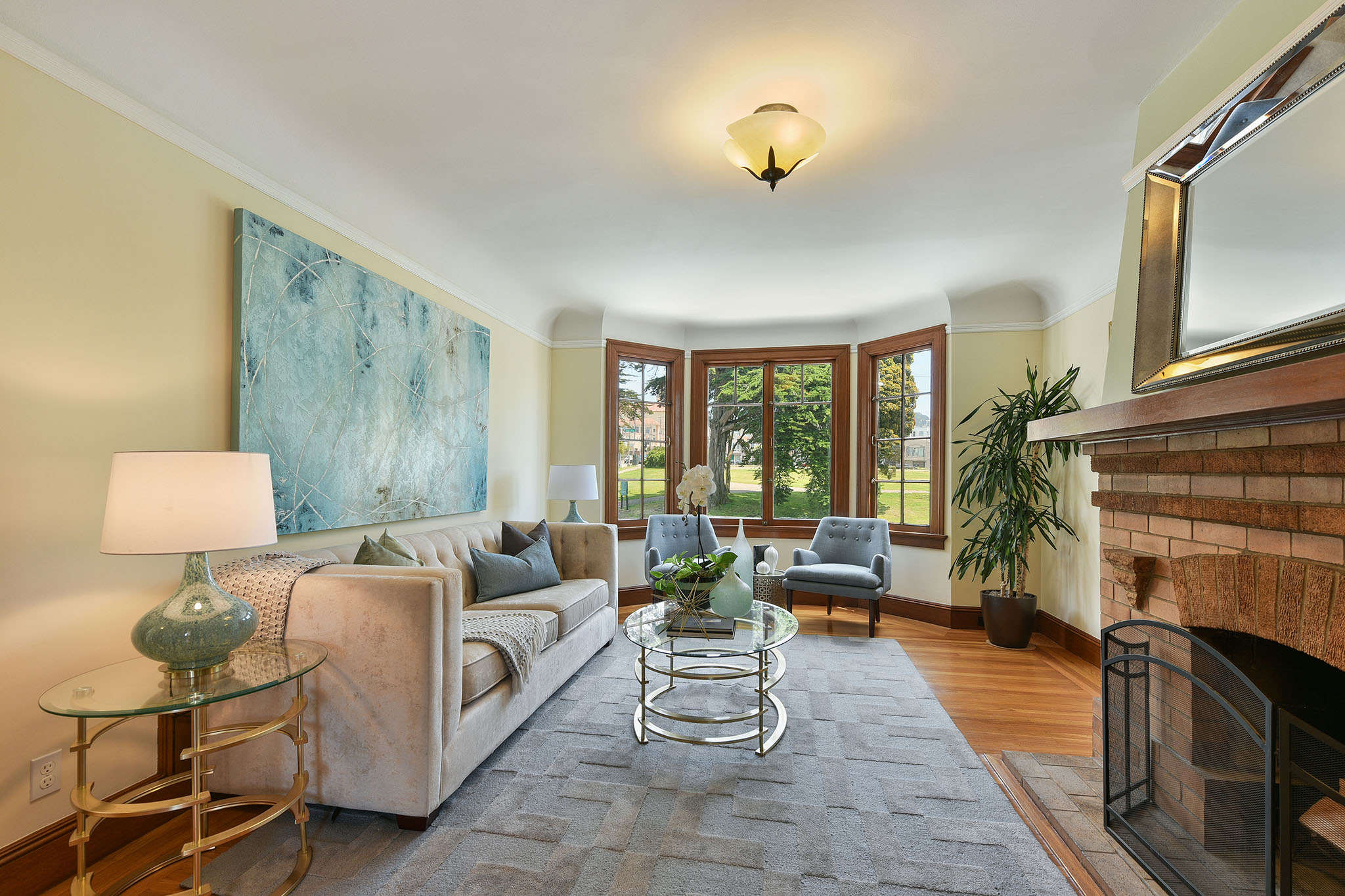 Park, city, ocean: mere steps from Stern Grove, this polished 2 BD, 1 BA home offers the best of city living in a coveted natural setting. Leafy vistas and views soothe and inspire, gorgeous period details lend charm to the interior, and the large garage includes a bonus area with expansion potential. In the living room, a big bay window reveals green grass and towering trees; a cozy brick fireplace anchors the seating area. The light-filled, modern kitchen is a chef's dream with stainless steel appliances and a breakfast nook, and the lush backyard sets the stage for entertaining. Shop and dine in West Portal or Stonestown; visit Larsen Pool, Ocean Beach, or the Zoo. All of this and much more is within blocks of your new home.

Prior to the 1910s and 20s, the Outer Sunset was, for the most part, a vast expanse of undeveloped sand dunes. Less than a block south of 2611 20th Avenue, George Greene homesteaded the parcel of land now called Stern Grove and had very few neighbors. He established the Trocadero Inn there, which was an isolated roadhouse offering dancing, gambling, hunting, and other recreation far from San Francisco's bustling downtown. The Inn closed in 1916, as Prohibition loomed and bootleggers began to trouble the place, but George Greene stayed on, watching as the surrounding neighborhood began to develop. Nearby, Carl Larsen also had a homestead on which he ran a chicken ranch (in addition to his other pursuits as a carpenter and owner of the Tivoli Cafe and Hotel Larsen in the Tenderloin). It was his land, donated to the city around the time that 2611 20th Avenue was being built just across the street, that became Larsen Park.

In the decade following World War I, the Outer Sunset neighborhood blossomed with block upon block of speculative tract houses. Small groups of houses with similar forms and designs were erected and quickly sold to San Franciscans who wanted the latest in modern suburban housing. Contracting firm The Meyer Brothers was active and prolific in this development of the Outer Sunset and appear to have been responsible for the construction of the house at 2611 20th Avenue, as well as many of its neighbors. The expediently-built pattern-based form is seen repeated in the houses on either side of 2611 20th Avenue, including a basement level garage and entrances topped by angled and square bay windows with distinctive gable ends. This is clear indication of the houses' origins as an early tract. However, the Meyer Brothers took care to individualize each facade in the group with unique features; varying the shape of entry arches and changing up the roofline forms to avoid blatant repetition. While common, this approach to building was significant to the time and place in which it was done, creating unmistakable character in San Francsico's outer neighborhoods.

The earliest known owners of the house at 2611 20th Avenue were William F. and Mary Siebold, who were in residence with their young son as early as 1930. William was born in New Jersey in 1894 and worked as a plumber for the City of San Francisco. Mary was born in Kansas the same year and 3 year old William Jr. was born in California. The Siebolds appear to have moved around frequently and only stayed at the house for a couple years before George and Laura Goodall moved in about 1932. George was born in Massachusetts in 1888 and worked as a dry goods salesman. Laura was born in California in 1889 and was employed as a nurse working variously for private families, the Department of Health, and as relief staff at the Central Emergency Hospital. The Goodalls stayed at 2611 20th Avenue for many years. Laura died in 1969 and George stayed on until his death in 1972. After that, the house was purchased by Munovshag and Serpouhi Jangotchin. Munovshag was employed as a dressmaker and the Jangotchins lived in the house into the 1980s.

The house very subtly expresses the Mediterranean Revival style; both its Italian and French derivations. The Mediterranean Revival style was popular in the post-World War I era, as it evoked European aesthetics which had been appreciated by American servicemen during their tours of duty in the Mediterranean region. At 2611 20th Avenue, the light colored stucco cladding and shaped entry arch speak to Italian influences, while heavy moldings, narrow vertical bay windows, and austere eaveless gable and hip roof forms have a French flavor.

The left side of the raised basement level features a narrow tradesman's entrance with an original partially-glazed paneled wood door on the left. This would have been the door used by repairman, delivery people, and household servants to enter the house without using the formal front entry. To the right is a paneled roll-up wood garage door which replaced the hinged double doors common to the 1920s. The size of the garage opening is indicative of the size of cars - the likes of Ford Model Ts -  that were available in the mid-1920s. The house's primary entrance is sheltered within a vestibule on the right side of the basement level. The intricately shouldered arch is spanned by a metal security gate and the front entry door is paneled wood. The first story, or primary living level, has two bay windows on the front; one angled and one square. These hallmarks of San Francisco architecture feature heavy molded trim at top and bottom and are fenestrated with multi-lite casement windows surrounded by molded trim. The left bay window is capped by a faceted hip roof and surmounted by a prominent gable end. Although it is eaveless, molded trim defines the roofline. Meanwhile, the square bay window to the right is topped by a hip roof extension of the main roof, also trimmed with eave moldings. The complex roof forms belie the fact that the majority of the house has a flat roof; a strategy used since the days of the Old West when false-fronts were first used to increase the height, 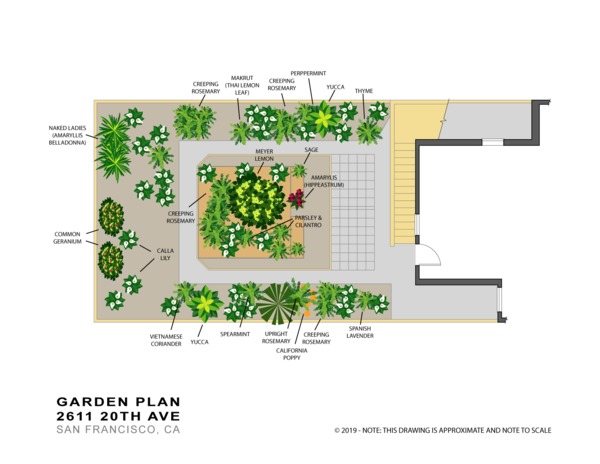 Located in the southwest portion of San Francisco, Parkside offers homes with some of the most remarkable views of downtown SF. Sometimes referred to as part of the Sunset, this area boasts a somewhat suburban fee To the east, Inner Parkside is a picturesque gathering of gorgeously manicured homes. For great boutique shopping, the nearby West Portal neighborhood makes a superb offering, and features a multitude of delightful cafes and restaurants. To the west, Outer Parkside highlights a selection of Henry Doelger developed homes, from the 30s and 40s. They are generally one-story over a garage, many of which have been reconfigured as in-law units. The Parkside neighborhoods offer an engaging mix of families, retirees and students from SF State.l on streets like Escolta Way, with individual homes and small, though charming, front yards. In its center, adjacent to well-regarded Abraham Lincoln High School, the unique Sunset Reservoir spans eight square blocks, and is something of a surprise in San Francisco's urban environment. In line with California's green energy pursuit, the areas will soon boast California's largest solar voltaic collection system. 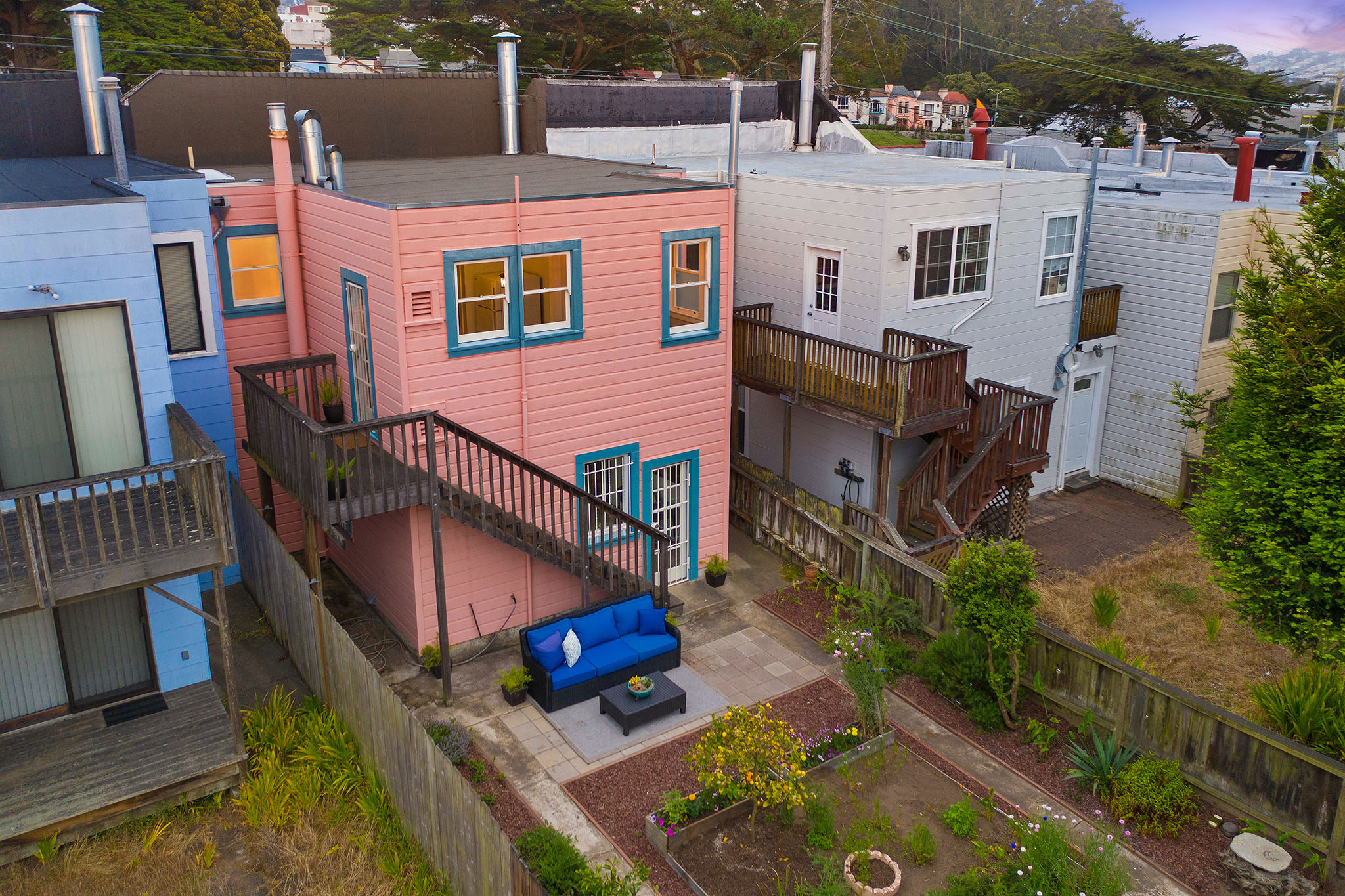